NOTE: THE QUICKEST WAY TO ACCESS AND EVALUATE THESE UNDERSTANDINGS THAT SAVE THE WORLD IS TO WATCH/READ THE INTERVIEW AND TO READ THE SUMMARY BOOKLET, TRANSFORM YOUR LIFE AND SAVE THE WORLD. 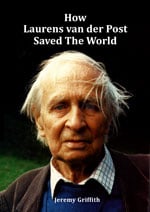 This book, with the proposed cover shown here, describes how the pre-eminent philosopher of the twentieth century, Sir Laurens van der Post’s extraordinarily honest writings about the human condition in his 30 odd books — especially in his books about the relative innocence of the Bushmen people of the Kalahari — played a crucial role in assisting and inspiring biologist Jeremy Griffith to go on and actually solve the human condition and by so doing save the human race from terminal psychosis and extinction.

The book is currently being reviewed by potential publishers, so it is not yet available, but because of its world-saving importance, a condition of it being given to a publisher is that electronic copies are also made freely available on this website (an availability that the WTM knows will only increase hardcopy sales from bookshops), and so it will soon be freely available here.

Please note that the essence of How Laurens van der Post Saved The World is already available to be read in F. Essay 51.

2020|THE Interview That Solves The Human Condition And Saves The World!

This booklet provides the ideal, very short, introductory summary of Jeremy Griffith’s definitive treatise on the human condition in his book FREEDOM: The End Of The Human Condition. It consists of the transcript of acclaimed British actor and broadcaster Craig Conway’s astonishing, world-changing and world-saving 2020 interview with Jeremy about his book FREEDOM — which presents the completely redeeming, uplifting and healing understanding of the core mystery and problem about human behaviour of our so-called ‘good and evil’-stricken human condition — thus ending all the conflict and suffering in human life at its source, and providing the now urgently needed road map for the complete rehabilitation and transformation of our lives and world!

This series was developed to help subscribers access the fabulous new transformed world that opens up for all humans now that understanding of the human condition has been found. As these essays cover all the main subjects in FREEDOM: The End Of The Human Condition they provide an easy way to read FREEDOM in wonderfully illustrated bite-sized portions.

READ, PRINT, SHARE OR LISTEN TO (AS A PODCAST) THE FREEDOM ESSAY SERIES This is a short, powerful condensation by Jeremy Griffith of his definitive treatise of the human condition in his book FREEDOM.

The genesis of Transform Your Life And Save The World  lay in Griffith’s address at the launch of FREEDOM at the Royal Geographical Society in London in June 2016. Beginning with very brief extracts from Tim Macartney-Snape’s Introduction and Sir Bob Geldof’s keynote address at the RGS, it goes on to summarise the content of FREEDOM in 3 powerful chapters: ‘The Dishonest Biology’, ‘The Truthful Biology’ and ‘The Resulting Transformation Of The Human Race’.

In fact, in just 82 pages of sensational world-shaking but at the same time spectacular world-saving TRUTH about human behaviour, Griffith delivers a presentation that is so profoundly liberating, relieving and transforming of your life that this little book may be all you need to read!

Note that, as with all of Jeremy Griffith’s works, Transform Your Life And Save The World  is so important, it is and will remain, FREELY AVAILABLE here to read, print or share.

May 2016|FREEDOM: THE END OF THE HUMAN CONDITION FREEDOM: The End Of The Human Condition is the definitive presentation of Jeremy Griffith’s breakthrough biological synthesis on the human condition. Professor Harry Prosen, former president of the Canadian Psychiatric Association, has said: “This book of books, indeed this greatest of all books, effectively takes humanity from a state of bewilderment about the nature of human existence to a state of profound understanding of our lives. It is a case of having got all the truth up in one go! I believe this is the most sensational information to ever appear on planet Earth.”

FREEDOM was launched at the Royal Geographical Society in London in June 2016. See details of the launch and subsequent publicity here.

FREEDOM is FREELY AVAILABLE here to read, print or share. Copies are available for purchase in bookstores including Amazon. 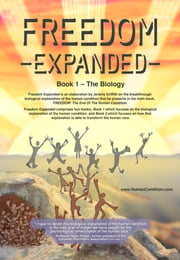 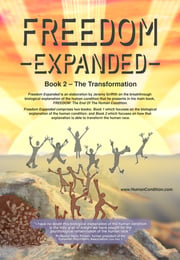 Please note: While FREEDOM: The End Of The Human Condition is the concise, main presentation of Jeremy Griffith’s breakthrough biological synthesis on the human condition, his book Freedom Expanded presents the comprehensive account of his insights, which means it will eventually incorporate the content of ALL his books and writings. Constantly being added to, Freedom Expanded is composed of two books, Book 1 on Griffith’s biological explanation, and Book 2 on that explanation’s transformative effects.

Freedom Expanded: Book 1 presents the dreamed-of biological explanation of the human condition that ends our species’ underlying psychosis and transforms the human race.

2014|IS IT TO BE TERMINAL ALIENATION OR TRANSFORMATION FOR THE HUMAN RACE? This book has been presented in two versions and in two stages.

Since the book is about the biology of human behaviour, the publisher’s first responsibility was to promote it within the scientific community. This was done in 2014 by publishing the book with a title that emphasised the serious plight of humanity, which science is ultimately responsible for solving—that title being IS IT TO BE Terminal Alienation or Transformation For The Human Race? From July to September 2014 over 900 copies of IS IT TO BE were sent to leading scientific institutions, scientists and science commentators throughout the English-speaking world to introduce them to these world-saving understandings.

In 2016, a second version that is orientated to the general public was published online. Containing the same content as IS IT TO BE but with an additional first chapter and further insights, this version has the title FREEDOM: The End Of The Human Condition. It is this version that was officially launched in June 2016. FREEDOM therefore replaces and supersedes IS IT TO BE.

2011|THE BOOK OF REAL ANSWERS TO EVERYTHING!

“Such is the explosion of insight that occurs when understanding of the human condition is found that all the books in all the libraries in all the world couldn’t deliver the definitive explanations contained in Jeremy Griffith’s latest book, on the great issues such as: Human condition — What is science? — What is love? — Soul — Conscience — Good vs Evil — What is the meaning of life? — Is there a God? — Our ego and egocentric lives — How can we save the world? — Consciousness — Human nature — Why do people lie?” Tim Macartney-Snape, AM OAM

READ, PRINT OR SHARE THE BOOK OF REAL ANSWERS TO EVERYTHING!.

Filmed in 2009, Video Series 1: The Biology, contains a 9-part introduction to the human condition and its resolution, presented by biologist Jeremy Griffith, featuring an Introduction by Tim Macartney-Snape AM OAM and Professor Harry Prosen. Video Series 1 has now been incorporated into the ‘Introductory Presentations’ section of the WTM Video Library.

Containing the understandings upon which the WORLD TRANSFORMATION MOVEMENT (WTM) is based, Freedom Expanded: Books 1 & 2 represent the comprehensive presentation of Australian biologist Jeremy Griffith’s breakthrough treatise on the origins and amelioration of the human condition.

2006|THE GREAT EXODUS: FROM THE HORROR AND DARKNESS OF THE HUMAN CONDITION

With a foreword by Professor Harry Prosen, former President of the Canadian Psychiatric Association, this book contains both an elaboration of the biology of the human condition that is presented in The Human Condition Documentary Proposal and an expansion of The Great Exodus essay that was originally produced for inclusion in an anthology (see below).

In 2006 Jeremy Griffith was invited, among other scientists and thinkers, to submit an essay for inclusion in a book about ways to live a meaningful life. The essay that Jeremy submitted, also titled The Great Exodus From the Horror and Darkness of the Human Condition, was published in Living a Life of Value in the United States in mid-2006.

Written by Jeremy Griffith, this proposed impasse-breaking four-part documentary series about the human condition received enthusiastic responses from over 100 of the world’s leading scientists and thinkers.

With a foreword by Templeton Prize winning biologist Professor Charles Birch, this book by Jeremy Griffith became a bestseller in Australia and New Zealand. Commendations were received from eminent scientists such as Professor John Morton.

PURCHASE A SPECIES IN DENIAL FROM AMAZON (Note, since the print edition has been extensively revised, we strongly recommend you print off a free copy from our website - see link above.)

1991|BEYOND THE HUMAN CONDITION

PURCHASE BEYOND THE HUMAN CONDITION FROM AMAZON 1988|FREE: THE END OF THE HUMAN CONDITION

Jeremy Griffith’s first book presents all the main ideas in his biological treatise on the human condition.

READ, PRINT OR SHARE ‘FREE: THE END OF THE HUMAN CONDITION’

PURCHASE FREE: THE END OF THE HUMAN CONDITION  HARDCOPY FROM AMAZON This submission by Jeremy Griffith contains all the main ideas in his biological treatise on the human condition.

This is not a search page